Any discussion of the Roman Republic will sooner or later turn to figures such as Cicero and Julius Caesar, but this was an era of complex characters well equipped with great ambitions. It was also a time of intense creativity, and its volatile politics reflected a cultural upheaval that was as exciting and productive as it was violent and devastating. Cicero and Caesar remain alive for successive generations through the survival of their works, but in reality, little remains of the wealth of literary production from the Classical world.

This blog post is a chance for me to take a step back form the business end of getting a book into print, and reflect a little on how I got here with Varro.

Amongst the countless important works lost from antiquity, the many books written by M. Terentius Varro – during a long life spent at the heart of some of the most combustible events of the first century BCE – should rank among the most missed. Varro’s correspondence with Cicero hints broadly at the excitement of the closely argued, competitive relationship they enjoyed. Caesar’s comments on Varro’s canny behavior show him to have been a man well able to maneuver between the splintering factions whose conflict would end in civil war. But it is in Varro’s own surviving words that the depth of his scholarship and his acute political sensitivity are most vividly manifest. Combined with his curiosity, his passion for unpacking the nuts and bolts of civil society, and his acerbic wit, more than any other figure it is Varro who best represents the era’s challenges to political, linguistic, and ethnic norms, and the radical solutions that would develop into the Augustan Principate.

Varro’s sardonic study of agriculture in an age of civil conflict (de Re Rustica) survives intact, but only one other work is substantially available today. Luckily, this work is his massive multivolume study of Latin (de Lingua Latina). This is the subject of my book (Language and Authority in de Lingua Latina: Varro’s Guide to Being Roman, get it soon: University of Wisconsin Press). In choosing to investigate the deep relationships between history, identity, words, and the structures that gave them meaning, Varro hit upon at topic that would not only enable him subtly to tackle dangerous topics (dictatorship; multiculturalism; traditional values; imperialism) but would set him on course to become the defining voice, the arbiter of what it meant to control language in contexts and across media that were increasingly contested between conservative and radical factions.

In his success lay his (and our) tragedy. As I argue, it was in coming so all-encompassingly to produce the last word on Latin (language of power, empire of the sign…) that his analyses and solutions took on a quality of inevitability that allowed them to transcend his personal agency. Quite evidently, here is an author whose works’ monumental success was his downfall (at least in terms of his afterlife as an individual writer). Varro’s precepts on Latin (and on many other things) would survive as self-evident facts and data; his role as an intellectual and as a quirky, creative, man of politics, proudly Sabine when ethnicity was in question, drifted out of sight. 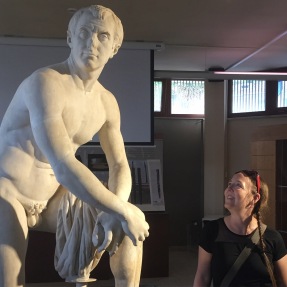 The keynote of my research career (paring things back to basics) has been the exploration of how best and most imaginatively to access and understand the role of the past in the present. As a Classicist, the ‘present’ in my sights is simultaneously the first centuries BCE/CE, and the twenty-first century, while the ‘past’ extends from the archaic worlds of Greece and Rome through to contemporary yesterdays.

My publications and research-led teaching have homed in on three key areas:

How these strands converged at Varro takes me back to 2009, and a month spent alone in a friend’s apartment in Rome whilst I regained my sense of self (and equilibrium) in the wake of some serious ill-health. I had no stick on my back, just the time to read anything. I was putting the final touches to a book (Roman Landscape: Culture and Identity) and wanted to tackle something off the beaten track. It was a hot evening as I was skimming proofs and considering what to turn to when it struck me that one of the most often-cited but never-read items I could think of was Varro de Lingua Latina. Why not…? And so I did. Cover to cover (inasmuch as that works with a nonetheless lacunose author).

From that sultry Roman evening, to 2018, with a long book floodlighting the delights of this text itself now working through the technicalities of book production, I worked through many stages. It is to these small-scale explorations that I turn for the next section of this blogpost…

I don't blog, I do Classics. I live in Rome and in Birmingham (UK). Much of what's here is never released into the wild, but I do tweet: @DianaJSpencer I am Professor of Classics at the University of Birmingham (https://www.birmingham.ac.uk/schools/historycultures/departments/caha/index.aspx). View all posts by Diana Spencer

5 thoughts on “Three great luminaries…(or, ‘how I wrote the book’), Part I”